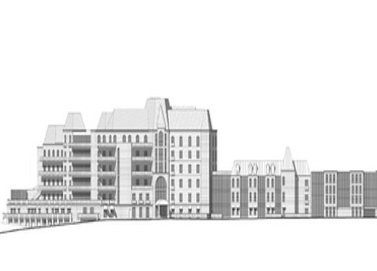 A massive condo project to be built on the grounds of the former 's hospital is one step closer to reality.

The city's planning committee voted 5-0 in favour of Panoramic Properties Inc.'s proposal for a 210-unit condo project on the site overlooking and .

Allen is the building architect for the project and was at the planning committee meeting to answer questions from the public and councillors.

Allen said this second draft of the proposal took in many comments from a June public input session.

A restaurant and fitness centre accessible to the public were axed from the plan, as was a third building on the north end of the property.

A taller tower on the south side with underground parking brings up the unit total to 210. That's including two units built on the helipad overlooking .

That was a major point of concern for a few of the speakers and some members of the planning committee -- that there would not be enough room between the condos on the helipad and .

The second draft of the design includes terraces for the condos so that the building itself is a few metres away.

The new design also includes underground parking. In fact, most of the parking on site will be underground. This allows the site to go from 24% of the property landscaped to 47% of the site landscaped. Allen said the site would use native plants so minimal upkeep is needed.

A few speakers said they were concerned the plan goes against the covenant that says the land must be for park use, open to the public.

City staff assured those speakers the covenant did not apply to the property being developed.

Ward 8 councillor Fabio Belli was impressed with the kind of tax revenue the project could generate.

"This project is probably $80-million plus, we're talking about $1 million in tax to

repave roads in every ward. We're looking at ways to generate revenue and this is a way to do it. I know you're going to have a high demand for these units."

Planning committee chair Dave Kilgour said he was really impressed with the developer taking into account the input from the first public consultation.

"I can't think of anything that comes before us and is perfect. I think this is a right blend of what is needed. You've come up with a design that is complementary to the site. This will give

us something so much better visually than what is there currently."

Allen said that was something he's often done.

"I'm ecstatic. In a lot development we've worked with city staff and citizens to come up with a win-win situation."

Allen said the plan is to get going quickly in the new year.

"We want to get to start immediately in 2013. We want it open to the public as fast as we can.

"We want to work on the hospital site first. The parking garage will be going in

sync with that and we'll see how it goes," Allen said.