New Life for an Old Hospital 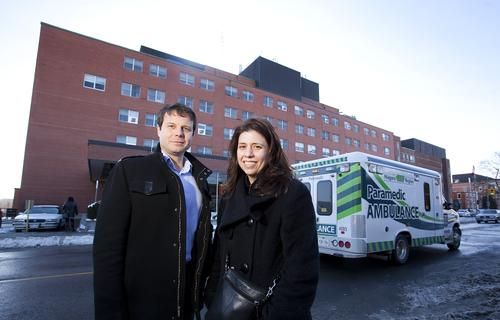 won't become a white elephant on when it shuts its doors in 2013, thanks to an early sales strategy that has already attracted a buyer for the property.

The large hospital site will become home to more than 125 residences, through a deal struck with developer and announced Monday by the Niagara Health System.

The NHS signed the deal with Panoramic Properties Inc. – Butera Group for the sale of the property once it no longer serves as a functioning hospital.

The purchase price won't be disclosed until the keys change hands in spring 2013. That's when the new health complex at and First St. in will open for business and the aging hospital site will close.

The company's project architect, Michael Allen, said the intent is to save as much of the existing hospital structure as possible.

"We're hoping to revitalize as much as we can with an adaptive re-use approach on the property," he said. "There will be some demolition and restructuring and things for that nature, but it is our intent to work with as much as we can".

NHS chief planning and development officer Gloria Kain said the health system was determined to find a buyer for Queenston and properties as soon as it realized the sites couldn't be used for the new hospital complex.

"We made a commitment to the communities right back then that we wouldn't just leave the facilities black", Kain said.

"We're part of this community and we wanted to ensure that it was the best use for the remaining site and to put vitality back into those community areas".

The site's parking lot, at the corner of and  was sold to a development company that has built upscale town-houses. For the site, the NHS worked with a Queenston Community Advisory Committee of residents and businesses to determine what the area needed.

Kain said it was the dedication of that group that led to a positive outcome.

Queenston Community Advisory Committee chair Robbie Craine Davidson said the committee is happy the company has said it will save parts of the hospital building, which she said is part of the heritage of the area.

She said they would love to see a health clinic on the site as well. "We're glad they've sold the site. We're glad these people are saying they're going to work with us", she said.

"It would have been nice to have seen a plan at this point as well, so we can get a little more excited. I'm sure that once they say 'OK, it's time to work with you,' we can sit down at the table with them and I'm positive they've seen what our ideas are as well."

City council took the unusual step in June 2010 of "pre-zoning" the 12-acre property to allow medium density residential development before it was sold. The move ensured any prospective development would know what the city wanted before making an offer to the NHS for the property.

Mayor Brian McMullan said Monday the city asked the NHS not to let the hospital "go back" and they were true to their word.

"I think is lends itself well to a mixed-use neighbourhood. Housing that's attractive, yet affordable", he said. "And I think with the work that's been approved for , it's a great fit for the whole neighbourhood.

"I really think it's going to be a great impact for that area, and hopefully a boost for the downtown." Michael Allen, architect

"The families that will move in will help support the businesses."

Allen said Panoramic Properties Inc.-Butera Group will work within the parameters the city has set and with the neighbourhood.

"We do want to engage the community groups to get their vision and see how it aligns with our vision," he said. "We're hoping to work with all the groups as best we can."

Allen said the company has a lot of experience acquiring older properties and redeveloping them into multi-residential properties.

It is currently in the process of redeveloping a hospital site in into residences, using the existing structure. It has also revitalized older structures in and .

In , the company overhauled residential properties along and in , turned a dilapidated townhouse complex on into high-demand condo townhouses, Allen said.

He said the company anticipates well over 125 units will be built at the site. Whether they will be for sale or rent is still not known.

The money the NHS receives from the sale will go towards paying for the new hospital, which is scheduled to be completed Nov. 26. After transition planning and staff training, all patients will be moved from the site to the new complex in a one-day event in spring 2013.

Allen said he is starting preliminary design work now so the company is in a position to get moving on the project as soon as the health system moves out. He said it's a minimum two-year project.

"I really think it's going to be a great impact for that area," Allen said, "and hopefully a boost for the downtown."

Retiring in Niagara region – why you should consider Niagara Falls

How to clean stainless steel appliances

Tips for moving in the summer