Out of Coal, Diamonds - by Ellie Chesnutt 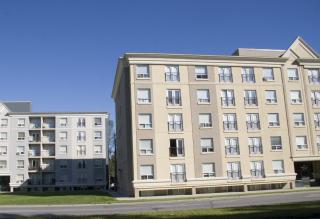 Out of Coal, Diamonds

The revitalizing of four buildings in

Little can more succinctly describe the state of an apartment complex than a nickname like "The Four Holes". This colourful moniker was given by locals as an apt description of the group of buildings on at in that had been neglected to the point of seemingly insurmountable decrepitude. However, a family company, the Butera Group Inc., used a blend of copious amounts of vision, time, money and effort to transform this wasteland before the community's eyes.

There exist many classic examples of the results from ongoing neglect of a residential property. But the state of the buildings originally built in the early 1960's and named the Four Winds would probably blow most of them away. Angelo Butera Sr., one of the owners and principles of the Butera Group, explains that even for a company that specializes in renovating buildings that have fallen into a state of disrepair, this project was by far the most challenging.

"Since starting the Butera Group in 1996, we have done about 30 projects, mostly in and some in . I can honestly say this was the worst condition of any building we have attempted before. There were major renovations on every area - almost nothing is left", he says.

The property managers had essentially been nothing more than rent-collectors for the preceding years. Consequently, on top of the decaying facility, tenants were out of control. Stan Wilder, a senior housing policy officer in the Development Services Department with the City of , describes some of the poorest kept and poorest maintained complexes in the city. This is a complex that had a reputation where drugs were sold, where there was criminal activity, where there was constant visitation by law enforcement officials and very high tenant turnover.

ARRIVING AT THE SCENE

The Buteras first began to look at the buildings in November 2003. The purchasing agreement was closed by March 2004 and a month later, construction was underway. At that time, the four buildings were completely occupied, but some tenants eventually chose to move out because of the construction. Others were ultimately evicted due to their conduct.

Michael Allen, Owner, Michael D. Allen Architect Inc., the project's architect, explains that one of the main challenges was working around tenants. Over time, though one of the buildings was completely emptied. Since then the inside was finished and all of the units have been rented again. Currently, the second building has just three of the original tenant left, the third has about ten remaining and the fourth has about a dozen.

Allen says his mandate for the project was a complete rejuvenation of the apartment complex. It took him between three to six months to draft the plans and have them accepted by the Buteras. The plan was to build onto the existing structure, which was one restriction he had to work around. The exterior was limited to stucco.

In contrast, the interior was completely gutted. Allen lists some of the many areas they has to bring up to standards: "Entrance foyers, security, elevators, corridors, kitchens, floors, plaster and the fire system."

Butera says that all of the materials that were in place have been removed and thrown out. He reveals with pride that the quality of everything that went into the building was the highest. "We imported ceramic tiles from , high class carpets, and top-of-the-line windows, doors and balconies."

The company also placed an emphasis on using many local suppliers, as well as some from and . Perry Farmers, Sales Representative for Ontario East, ICI Paint, was thrilled to have played a part in the project that he describes as a real showstopper. "The Buteras have made such a transformation that people passing by just stop and can't believe their eyes," he states.

Farmer and his company worked with the Buteras to get the right quality of paints. Because a previous relationship existed between the two companies, the Buteras already knew they wanted to use the high-quality, more environmentally friendly premium paints for their project. In further green initiatives, the Buteras installed energy efficient new windows, doors and light fixtures. As an added bonus, heating costs have been reduced by 30 per cent.

In addition to the look and feel, there have been some modern amenities implemented at the place. For instance a smart card system for the laundry room is a hit. People can call in to reserve their machine, and then they get a call back when the load is done. The card can be loaded using Visa and AMEX, which is a much simpler system then hoarding change all the time.

Security has been greatly improved. The main entry point uses a card system. There are no keys required and is a tenant leaves, their card is simply deleted from the record. Also, security cameras have been added in all the common areas. These are watched and monitored 24 hours per day.

The balconies, which had deteriorated beyond any acceptable standards, are now lovely accessories to the units. Done in a French manner, these add charm and style to the building, as well as appeal to potential tenants.

Farmer enthusiastically states, "The first thing a potential client would think to themselves upon walking in is 'Wow! When can I move in?' The Buteras have done a fantastic job, and with the brand new carpets, brand new blinds and brand new appliances they have really put a 180-degree twist on the place."

When the building was initially acquired, it had 204 units. Upon completion there will be 208-one will be a dedicated office, and the rest will be for rental. Butera is excited for the project to come to an end in April 2006 and is already pleased with the result. At the time we spoke, the exteriors of all the buildings were having the last touches put on. He joked that his next project would be going on vacation.

Still, he says the outcome has been well worth the effort in every way. "The neighbours are really happy with the transformation. Then they see me, they invite me over for dinner. Prices of the houses in the area have already increased by about 20 per cent," he adds.

Obviously, the value of the buildings themselves has gone up considerably. Butera explains that the purchase price was $7.3 million, and they have invested from $4 to $5 million. We have received offers for the completed buildings, but we aren't selling.

Before construction, the average rent for a unit was $700. That has now increased to $950-$1100. Allen explains the value, "This no longer has your typical apartment feel. The whole thing uses more upscale material and reflects a condo-feel."

This is in line with the area, which Buteras describe as a Class A location. Wilder offers more about the location: "The area has seen a lot of commercial development recently, which makes this complex strategically appealing. It is close to public transit, there is a new Home Depot and the largest Loblaws in the city nearby. The party who purchased the property obviously saw the potential that was there."

For the Butera Group Inc., work won't stop with the end of this major retrofit project. The team, which includes Angelo Butera Sr., his brother Vince, their respective sons Steven and Angelo Jr., as well as Angelo Sr.'s wife Lori, has already delved into a new retrofit in .

Architect Michael Allen is again an important part of the group. In fact he has worked with the Buteras for about 12 years and he says he is fortunate to be involved in the design and construction and enjoys assisting in all areas of a building.

And, Angelo reveals, the Butera Group is embarking on an entirely fresh challenge by starting a brand new building in February 2006. this will be situated near the company's base in . The project will actually consist of two buildings of 60 units each and 38 townhouses all in the same block. Sounds like a big bite to chew, but having cut their teeth on projects like the 'Four Holes' this will be a piece of cake.

The top sources of home clutter and how to minimize it

Add some Zen to your apartment