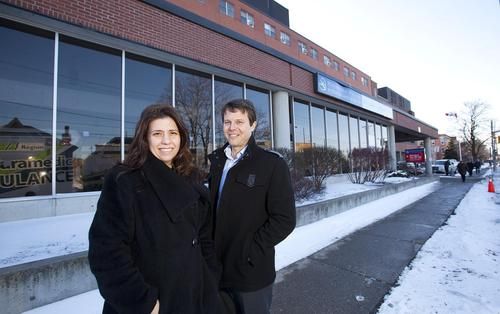 Review – A new life for a sometimes troubled district and a rejuvenating injection of new residents.

These are the big hopes for the future of the district voiced by business owners and residents following news the site will see new life as home to more than 125 residences.

That follows a deal announced Monday by the Niagara Health System in which a developer will transform the aging structure into homes when the facility shuts in 2013.

I’m looking forward to a change for the better,” said Stephanie Bent of Stephanie’s Gifts and Flowers, located across from the hospital’s emergency department. “It’s exciting really.”

“I’m sure we’re going to get a lot more walk-ins.”

Marion Brunett, who works part-time at Stephanie’s and lives nearby on , said the changeover will provide welcome relief in other ways. “No ambulances flying up here at 3 a.m. and people dodging them,” said the 43-year old.

The NHS has signed the hospital deal with Panoramic Properties Inc.-Butera Group, with the purchase price not revealed until the property is transferred in the spring of next year.

Meanwhile, Panoramic’s architect says plans are to save as much of the existing structure as possible. It is not yet known if the units will be for sale or rent.

In the opinion of Andreas Fortis, the 30-year-old co-owner of Fortis Family Restaurant on , “until it’s done you don’t know what they’re going to put there”.

The area around the eatery is already pretty rough, said Fortis, whose restaurant advertises it’s been around since 1966.

“There weren’t the problems you’re seeing here now,” he said. “So if there’s anything that could make that better, we’re all for it.”

Eating inside Fortis was Danielle Klignan of , who said her parents, Donna and George Warkentin, have significant family ties to the neighbourhood.

“They actually think (the hospital redevelopment) is a good thing,” said Klingnan, who was born in the hospital.

“There’s a plan, so that it doesn’t just become…..this empty building spot for many years and nothing happens.”

“They’ve got to do something with it,” said Meisner, a retired drywaller who lives on “So this is good.”