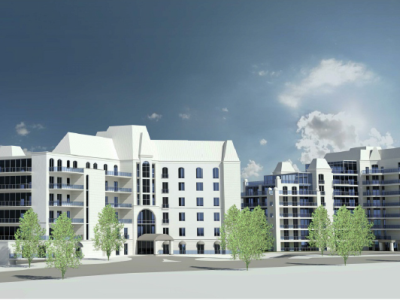 After months of heated and often acrimonious debate, Sudbury is getting what one city councillor described as an $80-million condominium development at the site of the former ’s Health Centre.

Panoramic Properites received unanimous support Oct. 22/12 for its plans from the city’s planning committee after almost three hours of debate. It was clear early on that changes Panoramic made to its proposal took much of the steam out of the opposition.

Unlike previous public meetings on the plan, which drew packed houses and cries of “shame” from the gallery, the house was barely half full and even the most strident opponents of the project seemed resigned.

Opposition to the plan centred on the fact it’s located next to ’s historic , the city’s largest green space, and many in the community have long dreamed of the hospital site one day being added to the park.

However, the Sisters of St. Joseph sold the property to Panoramic, a private developer, which announced its condo plans last spring. Initial public meetings over the spring and summer drew large crowds and some specific objections.

Allen, an architect whose firm designed the condo development, came back Oct. 22. with major changes to the original plan aimed at easing public concerns.

Allan outlined two major changes to the condo plan: eliminating the amenities—a health spa and restaurant—with an eye on easing traffic concerns expressed by neighbours. Allan also got rid of a seven-storey parking garage Panoramic planned to build at the far end of the property, right on the border with Bell Park.

The changes increased the number of residential units on the site to 210 from 190. While it still plans to demolish a decrepit structure on the site—known as the Mason building—the area will now be landscaped, rather than host a new building, and will include an 11-space parking lot.

The southern section of the former hospital will be demolished and replaced, going from a four-storey to an eight-storey structure containing 85 residential units. The separate parking garage will be replaced by a three-storey garage underneath the new building.

In total, there will be 332 parking spaces underground and 20 on the surface. With the changes, the total amount of property set aside for landscaping increases to 47 per cent of the 4.5-acre property, compared with 24.3 per cent in the original proposal.

“The architectural design will transform the original building and site, incorporating conventional materials such as stone, stucco, metals and glass,” says Panoramic’s report on its plans. “The development is aimed to promote good community design, creating a balance between the natural and urban environment.”

Plans for landscaping include a new bike path and walkway, which would link up with existing paths in . The northern area of the property near would get new trees, a mix of pine, oak, spruce, maple and birch. More than 100 bicycle stalls will be included, located in the condo units and the parking structure.

The new building on the south wing of the former hospital will create a 62-foot space between the old building and the new one. That will offer a view of that was blocked by the old hospital, without creating new visual obstructions.

Other unique features include a two-unit structure that will be built where the hospital’s helipad was located. Allan said they will be the two prime units, and will feature terraces and gardens in the front part, towards . He also said gardens and other landscaping features will be included in the rooftops of the main buildings.

The changes elicited praise from the audience and city councillors, who said they were impressed by how responsive the developer has been to public concerns.

“I still believe that a restaurant and wellness centre could have — and could still — work,” Allan said. “But in listening to concerns from the public and city staff, we took them out to try and establish common ground.”

He said construction costs will be significantly higher because 90 per cent of parking will be underground. But winning public and municipal support was worth it.

“The one thing that has impressed me most about this process has been the give and take,” said planning committee chair Dave Kilgour.

“We’re talking about a project here that is probably (going to be worth) $80 million-plus,” said Ward 8 Coun. Fabio Belli. “We talk about the million dollars in new tax revenue this is going to produce. That will easily pay for one or two new roads to be resurfaced.

“I think you’ve done a fantastic job and I fully support it.”

The plan still must be formally approved by city council, but that’s expected to be a formality. Panoramic hopes to begin construction in early 2013.